Jazz You Can Dance To: Back With Sonoran Sol

The life of a musician is like a wave. Gigs come and go and the scene is always changing so all you can do is go with the flow and see what happens. Recently the Tucson music scene has allowed my old Jazz Trio called Sonoran Sol to come out of mothballs for yet another exciting run and I am happy to say that it has been a great start.

My partner throughout each run has been the incredible Dan Griffin. He is not only the guitarist but acts in many ways as the music director. Some of the other musicians that we had worked with in the past had moved on in one way or another so it was Dan who suggested that we recruit the great Bobby Elias on bass guitar and that was when I decided that we would remain as a trio, at least for now.

We decided to have a lunch meeting in order to go over a new set list and discuss the vision of what we wanted to do musically at that point in time. Once we made our official list of songs we were all really excited as we had more than just the normal swing tunes that people might expect from a Jazz Trio. We also had some Funk Fusion, Latin, Blues and even some Instrumental Rock. Most importantly, these tunes have some serious groove so we already knew that our group would have more of an edge than most Jazz groups.

Right away I had a good feeling about things as we had a great batch of tunes while also knowing that I had learned even more than I had known previously about networking and booking gigs. In fact, it didn't take long for us to have several dates booked before hitting the stage for the first time with this particular lineup. It started out with me writing out a short but detailed bio before Dan and I putting together a great demo for some of these venues to hear. Right away we had a positive response from so many people who couldn't wait to bring the band to their venues.

Our first performance was actually on The Morning Blend television show on KGUN Channel 9 in Tucson, AZ. I was able to get the group on the show because I had performed a couple of times on the show previously as a solo drum set performer. Our objective was not only to perform for the whole city of Tucson but to also advertise our first few gigs while also filming what turned out to be a free promo video for the band to use.

We had a great time handing at KGUN studios with their amazing staff so to no one's surprise we performed really well to the raving reviews of those working in the studio. Once we had the video in our back pocket it led to even more gigs as so many people got a chance to see the type of energy we produced when we performed together.

That energy would continue to flow as we performed our first full show later that night at Bear Track U on University Blvd. We had a great time performing for a small crowd of enthusiastic music fans and couldn't wait for our next show, which would be a couple of days later at The Artful Space. That's where things got really interesting. Aside from the fact that we had a great set of songs to perform we also had a chance to jam with resident Conguero Miguel Bazemore who added so much to our sound. The audience really enjoyed what they heard with everyone asking when we would return for another performance.

All of this was more than I could hope for. I was confident in what we would bring to the crowd because of the fact that I was performing with two experienced professionals but there was no way to foresee how the public would react to what we had to say musically. After all, we are approaching things in a way that is quite different than what many people would expect from a Jazz Trio. But one thing I can say for sure is this: after all of these years, never underestimate the power of a good groove and that is something Sonoran Sol can do all day long.

On a personal note I am also having a blast because the band is giving me a chance to really stretch myself as a drummer. During my time as a working musician I usually hook up with a band that keeps me busy enough where I find myself playing almost one style of music on an exclusive basis. I have never minded doing that as the objective is always to keep a steady gig for as long it will last. During this run things are a bit different and I can already see the difference in my playing.

For the past 6 years I've been playing a lot of Country and Pop/Rock music, which means that most of my gigs have been straight ahead grooves and having to be as consistent as possible in order to keep that dance floor moving. Aside from that most of these gigs are about 4 hours long so my stamina was definitely there. I am still performing this kind of music as I have recently returned to the Tony Corrales Band while also having some other work on the horizon that is of a similar musical style. Of course we can now add music that is more syncopated with me having a chance to play some Funk, Latin and Swing beats along with some drum solos!

We are already excited for this coming summer as we already have a number of gigs on the books. The best way to get news on the band while also getting updates on our performance dates is at: https://www.facebook.com/sonoransoltucson/

We hope to see you all at one of our shows real soon. 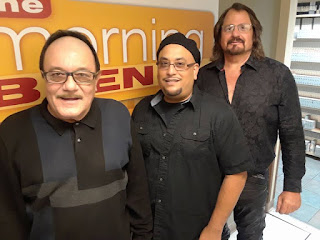 Posted by CSolorzano at 5:24 AM