The Best Week of my Musical Life

It all started on the afternoon of April 6, 2019. I had arrived to Instrumental Music Center in Tucson, AZ to set up my drums for a Master Class that I was going to lead the following day. I was really excited about it because I had not done one of these for a few years. During this time I focused mainly on playing gigs in the local music scene as I was more concerned with working than I being creative and in this case, in sharing the things that I do in an educational setting.

The nice thing for me is that I have some pretty amazing friends who really look out for me when it comes to me as a whole person. In other words, they looked past my performance schedule as they wanted to know what I was doing as an artist and not just as a performer. Whether it was someone close to me who challenged me to let out that inner artist or those who encouraged me to move forward with my creative endeavors once they heard that I was doing my Desert Drummer solo act again; every one of them gave me the confidence to believe that I had to go back to doing something that I loved doing.

What was most interesting about this day though was that during my drive home I had more than my Master Class on my mind. That was because I had four other musical events scheduled for later in the week with each of them being just as important to me as my solo appearance. To my surprise it didn't stress me out because I was really excited for each of them.

The following day arrived and before I knew it I was performing my opening drum solo for what turned out to be an eager audience seated before me. I had practiced hard for this event while also preparing how I was going to share some important material with the audience. The room had a great sound so my drums felt really good every time I hit them and with all of my preparation I was really pleased with my performance.

The thing I enjoyed the most though were the moments I was able to dialogue with those who attended. Many of them asked some great questions as they were indeed curious about all that I was demonstrating that day, which allowed me to communicate with them in a very personal way. The vibe was really loose so we had a lot of laughs and really enjoyed each other's company. That meant a lot to me because I wanted to make sure that everyone could see that I was there to share something with them rather than show off my skills in an arrogant way.

On my drive home I felt great for a number of reasons. First, there was the satisfaction of doing something I love for an audience again. When I began to reacquaint myself with this kind of drumming I could feel how much I missed doing it and now I was officially back with no intention of putting it away any time soon. Second, I have never forgotten some of the amazing people in my life that shared their drumming concepts with me. It didn't matter if it was one of my teachers or even a friend who did things that just blew my mind. The generosity of such people has always been a gift that I will treasure for the rest of my life. On this day I had the chance to do the same thing and I look forward to doing it again real soon.

Two days later I set up my drums at Loew's Ventana Resort for a private corporate gig with my band family in TCB. Any time we get together is an absolute blast with this evening being nothing less than what we have all come to expect.

After sound check we spent some time backstage and due to some changes in the event's schedule we had more time than usual to hang out. In this band that means we are going to laugh hard and often. All it takes is a few remarks from our lead guitarist and resident court jester Joey Cota to get us all started and within minutes we are falling over in laughter. Then we take that joy to the stage and as expected, the band sounded amazing.

Here I am now, two days later dropping back beats in order to keep the dance floor moving and I am enjoying myself as much as I did when the stage was mine while doing my own tribal grooves. There is always something special when you get to play with people that you really love to both perform with and be around. This band has been a big part of my life for over seven years and that is because I get to play some great music with some amazing people who are more than friends to me.

Could my week get any busier? You bet it can and I was just as excited to arrive to Noble Hops Gastropub for an evening of great instrumental music. After having an amazing meal compliments of our host we started our performance on the patio on what was a beautiful desert evening. This group had not performed for a while so just seeing my band mates again got my adrenaline going as I couldn't wait to start the first song.

The show began and there we were offering a set list that had a wide variety of soulful grooves that kept the heads moving and toes tapping as our audience enjoyed their meals and drinks. The band was on and we were smiling all night long because we could feel that connection both with each other and with so many in the audience who raved about our sound.

Three gigs in five days with each of them being a totally different experience. This is another gift of being a performer in different settings. To be able to play my drums with different groups is one thing but to be able to sit in three different musical settings at all is more than amazing. And, to be able to do so in the same week? That would be more than enough to celebrate what many would consider a great week but as we will see I was far from finished.

The following evening was the moment when my students at St. Augustine Catholic High School would perform at the very first Percussion Showcase. For the past two school years they had performed at school pep rallies, off campus at some of the feeder schools and even up in Phoenix for a Catholic Schools rally on the lawn of the State Capitol. But now, it was an evening that centered around them as they were going to show their families, friends and school mates all that we had worked on as a class.

After a fun pizza dinner the students started the show. There were several selections where they performed as a full ensemble and also in small groups settings. The response from the audience was awesome as they all did a great job. They were well rehearsed and I could see the trust they had in each other that came from both a lot of rehearsal as well as the number of performances they had already done throughout the school year.

On a personal note, I have a much bigger personal investment in this class aside from the fact that I am the teacher. My son is also a student in the class and he is not only an amazing drummer but also becoming a composer himself as he wrote one of the selections that the students performed that night. Aside from that, there was a small group performance that night was featured the two of us as we did a father and son duet. I can not put into words what it meant for me to share the stage with him and how much it also means to me that we can share this mutual love of drumming.

I'm sure you can tell that I was glowing with pride for various reasons on what was a very special evening.

Saturday night arrived and it was time to finish this amazing musical week with another performance with TCB at the place where it all started for us. While many would see this as just another gig on another Saturday night there was something for me that made this night a little more special. The day before the show Tony announced that he had been nominated by the International Singer Songwriters Association for the following awards: Male Vocalist of the Year, Male Rising Star, Album of the Year, Male Single of the Year, Male Songwriter of the Year and Music Video of the Year!

...and did any of you think that I would not make sure that the audience was not going to honor my brother properly for this amazing achievement?

This is what happens when you are genuine in every way. TCB has been through a lot together and while many of our moments have been filled with laughs we have also had our share of struggles both as a band and personally. Through it all, we have been there for each other and that cultural climate of ours was created and maintained by the great Tony Corrales.

That is why I had to interrupt our show for a moment to hit the front of the stage to invite the audience to honor him because he deserved it. It was so nice to lead everyone in our cheers for Tony as he has always been so good to his band members as well as our audience who have always been nothing short of amazing. It has always been such a privilege to be a part of this band.

This was indeed an amazing week and certainly one that I will never forget. 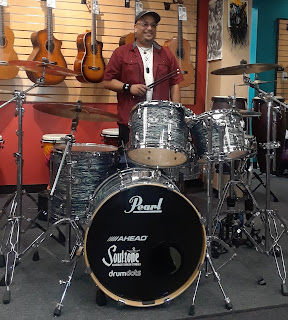