This year has been a roller coaster to say the least and it is hard to believe that everything I went through happened in a twelve month period. However, I am happy to say that the year has been ending on a very high note. Usually I wait until New Year's Eve to publish my thoughts in writing but I have a gig that night and I am feeling a little ahead of the game right now. So here we go:

January was a very eventful month. I was working with a Journey tribute band and back in the rock scene for the first time since I left California. It was a lot of fun because I was playing great music and met some guys who have become great friends. The band put on some great shows but unfortunately it didn’t last too long because the behind the scene ethic was both deceitful and disastrous. I can’t deal with that because bands have to be operated on trust and it doesn’t help when those who operated in this way were both delusional and in total denial about their way of doing business. Sadly, I could see that the rock scene hasn’t changed one bit and it wasn’t limited to the clubs in Hollywood or the time period in which I played in those clubs.

I also went to NAMM in Anaheim, CA for the first time in about 7 years as my performance schedule prevented me from going the past several years. It was nice to connect with my endorsement companies (thank you Soultone Cymbals, Silverfox Sticks, Drum Dots and Hansenfutz Pedals) and to see some old friends from the CA music scene. I also got the chance to meet some of my favorite drummers ever and tell them what their playing has meant to me while also taking some pictures with them. You can see my NAMM blog for all of those details. http://desertdrummer.blogspot.com/2016/01/namm-2016-reflecting-on-great-weekend.html 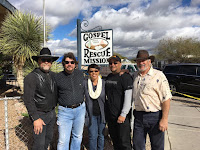 More changes were about to come that were not exactly unexpected. In March my band Come Thirsty, which was a Christian group that had been performing all over Pima County for the past seven years decided to call it a day. Everyone's schedule got too hectic and we were never able to piece things together the way we used to. At least we went out with a bang as our last couple of shows were great. There is nothing in the world like using your musical talents to serve the Lord and it was always a great feeling to get out there and play what I have always felt was the purest music of all. I miss this band and always will.

I spent a big part of spring and summer home on the weekends with my family. I had some filler gigs here and there but it was great to spend down time with my family. I also realized that I needed a break from the stage because even though it's great fun to perform it can also be a grind to say the least. I was able to recharge my batteries while also working on my drumming in order to make improvements and to expand my horizons. I also spent some time demoing some new music I wrote in my home studio and hope to get some of these tunes out sometime soon on a new solo album with this one not being just tribal drumming compositions.
In June the Tony Corrales Band came out of our hiatus for a special one night summer gig at the Outlaw Saloon. Man…that was a special night to say the least. I usually arrive very early in order to set up and then to prepare mentally for each show. Upon arriving to what is usually an empty club the place was half full and then at full capacity about an hour before we went on! Me along with the rest of the guys were initially stunned and then honored that so many people were that excited to see us perform for the first time in six months. And to be onstage with my brothers again…it almost brought tears to my eyes. 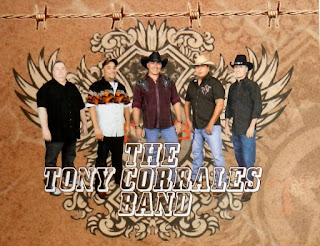 Then fall came around and I spent a lot of that time away from music. I focused a lot on my writing projects and really enjoyed the creative spurt I was feeling as well as the extra time I had to work on these projects. Like music, writing is another outlet I have to express myself and I love it just as much as music. I was most grateful for this time period because I really needed to focus on these projects that were most important to me. I am hoping most if not all of them will see the light of day in 2017.

After finishing my writing projects I was contacted by the Billy Shaw, Jr. Band as they were looking for a drummer to complete their new group. I went to the first rehearsal and could see right away that this was a great opportunity to get even more work in the country scene because they had a great sound and were all total pros. Aside from that, it was also a joy to know that I would be working with another group of guys with class.

October arrived, which is my favorite month of the year, and I was ecstatic to be back with the Tony Corrales Band. It wasn’t supposed to happen until 2017 but good old Tony just couldn’t wait. We returned to The Maverick for the first time in a little over three years and knocked out a couple of great sets before heading back home to the Outlaw Saloon. I was so happy to be back with my boys. 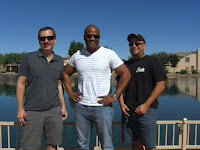 At the same time I was now in rehearsals and in the studio with my old band, which is now called the Blue Note Ritual. We hadn’t worked together in over 22 years and now we were back together playing the music we love. We tracked the rhythm parts in Tucson and look forward to finishing the guitar & vocals this spring before we mix it all down in the summer of 2017. Most of what I had to say about this particular experience is in a previous blog I wrote about this magical weekend but I do have to mention that this project really helped prepare me for the end of the year grind that was about to come. I had to be in top form to play this music and now that I am going to be flip flopping between two great working country bands, which means I have to be in tip top shape in terms of my playing. Going through with this project really helped prepare me for the coming onslaught of gigs.  http://desertdrummer.blogspot.com/2016/10/the-blue-note-ritual-weekend-of.html

The first Billy Shaw Jr. Band gig was two days before Halloween at the Outlaw Saloon so we showed up to our first show wearing costumes (sort of…I wore a Joker t-shirt and hat). This was going to be our first impression as a country band? Wait a second…everyone else was also in costume so let’s party! The band rocked! We nailed each song really well and the crowd loved our diverse set list that kept them dancing all night. The highlight for me was when we did the Charlie Daniels classic “The Devil Went Down to Georgia.” Billy is an amazing fiddle player and nailed that bad boy with the rest of us offering our support for his great fiddle playing. The audience didn’t dance much during the song but once we finished the song I saw why: they were taking in the whole thing and roared their approval once we were done. That song is not easy to play and we pretty much blew them away. Billy, who was a finalist in Nash Next, more than lived up to that accolade. 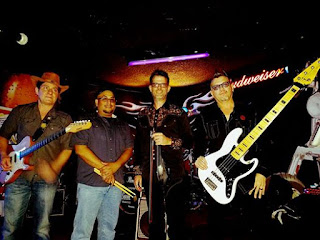 Aside from my return to the country music stages of Tucson I also began to record again with Richard Newell at Alegria Productions Studio. He is a songwriter, engineer and producer who hires me to track drums for various projects he is involved with. We have a great chemistry as I am able to deliver the drumming he wants on his songs while he is able to offer great insight on different approaches he wants when I drum on his material. He writes everything from Country, to Pop, to Ranchera and Cumbia songs and we have made hybrid pieces of work drawing from each of these musical styles. We have a lot of fun as we come up with some great tracks every time we work together.

As the year comes to an end I am back and forth between TCB and BSJB. I can only say how honored I am to be playing with two great bands with the most amazing guys ever. Every working musician desires one decent working band that is a true team of pros who think more of the sound of the band first more than their egos. I am in two bands like that! I am such a lucky guy and appreciate the time I have with these guys along with the support both bands get from the most amazing fans of country music.

All I can say is that I am really looking forward to 2017. Thanks to everyone who has been a part of this twelve month journey. I know the best is yet to come. 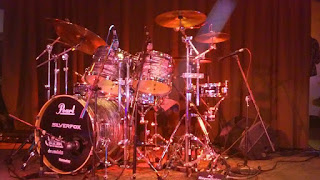