It's hard to believe that I hadn't seen Iron Maiden perform live in 17 years! Times flies and it doesn't help when you're working a full time job and later have a family and a home to take care of. That's when I realized that it was easier to go to a concert when I was a teenager because all I had to do was ask my parents if I could go and at times, beg them for the money to buy tickets. In most cases, my parents said yes and were happy to give me the money because they knew how much I enjoyed the music of my favorite bands.

My last Maiden concert was in Irvine, CA and I went with my wife as we were married for about three years at that point along with a friend and my goddaughter. It was during the Brave New World tour and it was an awesome show. Of course I had hoped to see them again real soon but life had a way of taking me down a different road. Since then we started having children, moved up in our careers as educators and relocated to the Tucson area.  Now I barely had the time to buy each new CD and listen to it in the car on the way to work while living in a city that Maiden hadn't been to in years.

What made the chance to go to this concert even more special is that my 14 year old son has loved the music of the Mighty Maiden for the last several years as they have become his favorite heavy metal band in the world. He had longed to see them live so when I heard that they were coming to our home state in the summer while we were both off from school there was no way we were going to miss this show. The last couple of times they had come through Phoenix was during the school year and on a weeknight so there was just no way for us to make it to each show.

The first thing that excited me about the evening was that he was the same age I was when I first saw the band live. I was a little 14 year old sitting in the 3rd row at Long Beach Arena with my sister and a sea of heavy metal hessians during the Somewhere in Time tour. It was a great show and it was so amazing to see my heroes that close to the stage and is something I will never forget.

Second, we both love the new album, which is titled Book of Souls and the stage set was a tribute to our distant relatives, the Maya! As expected, Maiden put on a great show that was second to none both in musicianship and in theatrics. Lead vocalist Bruce Dickinson sounded better than ever and the rest of the band was spot on. The band has always been one of the most professional bands out there and when fans see how hard a band works to give them their money's worth they repay such brilliance with a loyalty that is unquestioned that is also passed on to later generations.

Third, my son got a chance to hang out with other Maiden fans. When they heard of his love for the band and that it was his first time seeing them live then congratulated him and welcomed him to the family. We both really felt the love both from the fans and the band when Bruce spoke of the band's love for the fans and how much they appreciate our support. He also reminded us that we are a true global family as we are connected to the other Maiden fans around the world. You could really feel the sincerity in his words and the cheer of the crowd showed the band how much we love them.

The show went by too fast because we had a blast. It was awesome to hear new songs such as "If Eternity Should Fail," "The Red and the Black" as well as "Book of Souls." Then they pulled out some classics like "Children of the Damned" and "Powerslave" while standard tracks like "The Trooper" and "Iron Maiden" sounded as good as ever.

Thank you Iron Maiden for doing what you do best and we look forward to seeing you again sooner than later. Up the irons!!!!! 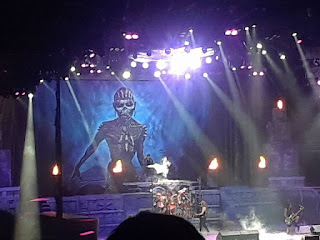 Posted by CSolorzano at 1:02 PM No comments: