The Blue Note Ritual: A Weekend of Fulfillment

Not too long ago I wrote about how one of my old bands from Southern California was preparing to reform and record the EP that we never finished back in the day. Well that weekend finally arrived and to say that we had a great time is an understatement. In the following blog I will share what it was like to reunite with my musical brothers in order to do what we do best.

It was my quarter break at work so I had a four day weekend ahead. Thanks to careful planning my old band mates from the band that was called Soma, which we now Christened the Blue Note Ritual was about to be in the same room for the first time in 22 years. The big day arrived and my drums were set up in my living room as I waited for Bogdan "Bobby" Jaliu and Mike "The Funkster" Young to arrive. I was anxious to say the least but there was no reason to get too excited so I just sat in my living room and read a book as I waited for their arrival. Soon I heard the sound of tires slowing down over some gravel so I looked out of my front door and there they were. There was no way I could wait for them to knock on the door so I was outside ready to greet them and help them bring in their gear. I had seen Mike off and on for the past few weeks because we had been rehearsing the bass and drum parts so he would have to get the second hug. This was the first time I had seen Bobby since our last performance back in 1994 so I had to greet him properly.

We had some small talk while the guys set up their gear and before we knew it we were facing each other and ready to count off the first song. I clicked my sticks and away we went...I couldn't believe how good we sounded. It was obvious that we all did our homework but we honestly sounded like we taken a few weeks off from rehearsing instead of being apart for over two decades! I was locked in with The Funkster (thanks to some rhythm section rehearsals) and Bobby was lighting up the top layer of the music with his funky guitar playing and licks that rolled over the top like a smooth operator. The last time the three of us played together we were three young blokes rocking out at The Fireside in Downey, CA. Now we are three family men with careers (Bobby is a physician, Mike works for the military and I am a teacher) but still rocking out with the same intensity that we had back in the day. I credit that to the chemistry that we had from day one because once you discover such a connection with a group of people it never goes away.

We continued to rock on for a couple of hours before taking a break to have some lunch. During our manly time over some pizza we shared our life experiences and just like before, the conversation turned to such matters as religion, politics (we are daring to say the least), social issues and other mind bending issues. As usual Bobby and Mike had some insightful thoughts as they are both really smart guys who know what is going on around them. This just goes to show how amazing they are as people because they are not only great musicians but also good people who are able to challenge my thinking as well as my musical abilities.

After lunch we got back to work and focused on one particular song that we were doing more than just relearning. Back in the day it was more of an up tempo funky adventure with some stops and rhythmic changes but as I found out during my rehearsals with Mike, it never sounded the way he had envisioned back in the day. Now it was time to do it right.

Now I was playing more than just up tempo grooves as he wanted me to orchestrate some Latin rhythms around my set of drums. Further, while he was lucky enough to keep his bass lines almost as they had been Bobby had to rework almost all of his parts. As expected, the chemistry of the group took over and just like that he had a new part that was not only amazing but totally fit what Mike and I were now playing together.

Rehearsal came to an end and that would be the end of our day together. Bobby decided to rest up a bit as he was still feeling his east coast time zone. Mike also felt the need to rest up as he was used to his early riser schedule. I wasn't so lucky as I actually had a gig that night with the Tony Corrales Band as we were about to end of our performance hiatus by rocking The Maverick for their weekly Ladies Night event. The show went well but I was toast because playing a four hour set is a lot of work as it is but it's even harder when you spend the early part of the day with the Blue Note Ritual.

The next day we met again at my place and went through a quick run through of the songs. We were all surprised how good we sounded the day before so we felt really good about the session the following day. So we did a quick run through the songs that we felt best about and did some extra polishing on the tunes that needed a little bit of work. After that I brought my daughter along as we went out for a snack and for a little bit of sightseeing in my hometown of Sahuarita, AZ. We had a great time just hanging out during what was a beautiful day. 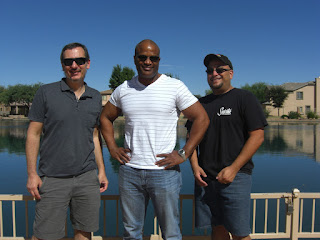 Later that evening I took my family to meet the guys and Mike's kids at a restaurant that Mike highly recommended called Chef Alisah's  We sat around and talked about the band and our two days of reconnecting with everyone offering their love and support. Then the food came and we celebrated with one of the best meals I ever had in my life. It was a great way to end the day so we were more than excited about our recording session, which would start in about 14 hours.

The following morning the three of us met for breakfast in order to fuel up for our big day. As always, we laughed and enjoyed each others' company before heading off to the studio. We arrived, met engineer Martin Cardinas and then had our stuff set up and ready to go. We were pumped up at the idea that we were actually in the studio and ready to document our music the way we should have many years ago. Even though it had been over two decades since we had recorded together it was something we had actually done several times in the past so we were comfortable and confident with each other. 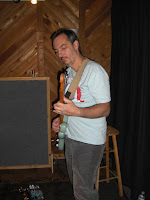 One of the things that helped a lot was that my wife Minh was able to come and give us an extra ear. Not only is she a great singer with tons of experience in the studio but she had now been recruited to offer her amazing vocals to the project so we needed her feedback on tempos and the feel of each song because we wanted to make sure that she felt comfortable with each take so she would be able to deliver her best performances when it was time for her to over dub her parts.

Surprisingly it didn't take too long for us to accomplish our goal. We needed to get the bass and drums down while Bobby put down some basic tracks that Minh would be able to write and rehearse her parts to. 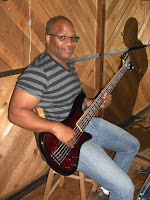 I was very pleased with what I heard and most excited to hear what would be the finished product. Martin then asked how long we had been playing together and we laughed when we said, "two days, after a 22 year hiatus." He was stunned as were we but all throughout this experience we could feel that connection that had always existed between us. Knocking out my last take was both thrilling and sad because I didn't want this moment to end but there is real work to do in the real world so I spent several minutes making suggestions of what still needed to be done. Once we broke down our gear we transferred the files to a flash drive and then thanked Martin for doing a great job before heading off for an early dinner.

It was nice to hang out one last time before we would soon go our separate ways again. We discussed the session and how great it sounded along with how great it was for us to be together again. Be together....yes, we are in fact a band again. Thanks to technology we will not only finish this recording project but work on new material as well. We are going to collaborate by sharing our ideas with each other and work on them via our home studios. Then once we settle on how the new material will sound I will go into the studio first to knock out my parts and then send the WAV files to Bobby and Mike for them to add their parts before sending them back to me so Minh can also add her parts as well. There is no timetable for all of this to happen but that also means there is no pressure. We do know right now that the future is bright for us because we already jammed on and recorded some new ideas that sounded great at rehearsal and will continue to work on those once we get these recordings done. I can't wait!

Dinner was over so Bobby and I said goodbye to Mike who was heading home to Sierra Vista. Bobby went back to his hotel to rest up after a long day and I drove home to be with my family. That was when I started to feel tired as I now had some time to wind down, which allowed me to feel how hard I had worked that day in the studio. It was well worth it.

The following morning I had breakfast with Bobby and Minh before he made his way to Tucson International Airport. Then it was time for me to get back to my regular routine while feeling most grateful for this second chance to play with musicians who I have always respected and loved playing with. I am happy to say that I have remained in close contact with the guys as we review the demos and wait for updates from Bobby and when he will get a chance to overdub his parts. As I write this blog he is just about settled on where he is going to record his parts and is already preparing his gear to give him all of the sounds he needs to have at his disposal. I can't wait to hear what he comes up with because I know it's going to be amazing.

So until I have more to share...thanks from the Blue Note Ritual. 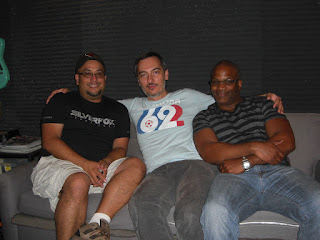 
Posted by CSolorzano at 9:41 PM No comments: