Earlier this week I heard the devastating news that my friend and former band mate Jeff Sanders had died in a house fire. Jeff was someone I met when I was a member of the band Come Thirsty and was someone I worked with for a little over four years before he decided to move on and do other things. To say that my heart is broken over this would be an understatement because he was such a great guy that everyone loved.

We first spoke on MLK Day in 2009 when I was driving home from CA after spending a weekend at NAMM in Anaheim, CA. I was helping put together a Christian band with my wife Minh and another musician friend of mine named Rich Phillips. Jeff was responding to one of our ads and we had a great conversation on the phone. I couldn't wait to meet him.

When the four of us met there was a magic that I can't describe. Jeff fit right in because he was such a nice guy and was the exact person we had hoped to find in a guitarist. Like the rest of us he had this urge to use his musical gifts to praise the Lord and he coulnd't wait to get together and rehearse for the first time as a quartet. Once that happened it was absolutely incredible! The chemistry between the four of us was amazing with Jeff really being the last piece we needed to complete the sound of the band.

Right away we had put together a few original songs along with some covers and before we knew it we were out there performing at various churches and faith based events. The band always received a great response from those in attendance with everyone of course loving Jeff's playing. He was such a great rhythm player so the groove was always solid but he also played these great solos that told stories, which was great because it helped push the emotion of the stories Minh sang in the songs. Aside from that, he loved people so he was always very approachable and was willing to talk to anyone about anything, regardless of how long it took.

Jeff was very proud of the songs that we wrote and he had a right to be since he was a big contributor to our sound. We all collaborated on everything we wrote but Jeff and Minh really defined our sound. When they two of them got together he would throw out these riffs that always set her off. Then Rich and I would add our flavors to the song and then it was done.

Our first encounter with Jeff musically was an idea he had for a song that would be known as I Surrender. He was a great acoustic guitarist and he had this lick that just propelled us to create this great song.  He also loved that Spanish sound of the guitar so to put something like this together took very little effort from him as he was totally in his element. This was a song people loved to sing along to and dance to at all of our shows: https://www.reverbnation.com/comethirsty/song/11278195-i-surrender

He was really proud of the song Elijah, which was the song that was known as our epic because it had such a beautiful story based on the life of the Old Testament prophet. I remember he had some cool ideas both musically and in terms of the visuals he would speak when he played his riffs for us. This was always such a fun song to play live because it was always so dramatic: https://www.youtube.com/watch?v=eSXUNKT9eI0

He had a very unique rhythm style and the song that really displayed his amazing technique was the song I Love You Anyway. Once Jeff came up with the opening riff Minh wanted to write a song for those people we met at shows who would tell us about their personal struggles and how God's grace saved them from these struggles. Aside from that he could really throw down a lead and I have always loved his lead on this song because of the story it tells within the story shared by the lead vocal performance.  https://www.reverbnation.com/comethirsty/song/11278187-i-love-you-anyway

Finally, when talking about the special chemistry we had as a band, this version of the classic Christian song Breathe really says it all. You will hear why it was also a song that many people asked us to perform at each our our shows. https://www.reverbnation.com/comethirsty/song/14775185-breathe

Aside from being a great musician Jeff just had what I call a positive enthusiasm. He was always in a good mood as he saw any chance to play music as a gift. But he was just an enthusiastic about his other interests. He was into all kinds of things from painting to making weapons to being a survival enthusiast. That's what led us to call him Mountain Man because he always loved being outdoors.

The other thing he was really passionate about was teaching guitar. He had several private students as well as classes at places like Pima Community College and he would talk all the time about his love for teaching. One of my favorite memories of Jeff the guitar teacher was when we were all hanging out after a gig one Sunday afternoon. We ended up at Guitar Center and the moment he walked in the door many of the sales people as well as the customers approached him and gave him hugs and pats on the backs as they talked about how great a teacher he was. Jeff just smiled and stood their with great humility and gratitude as you could see how much that meant to him.

Finally, and most importantly, Jeff really loved his family. When he wasn't talking about his interests he was always raving about how long he had been married to his wife as well as how much he loved her. He was also very proud of his children and would just glow every time he spoke of their recent activities. He was such a simple person but you can see how much he appreciated all that he had with his family being his greatest treasure.

I miss you brother! God bless you! 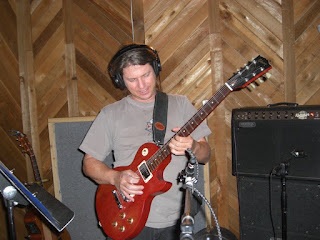 Posted by CSolorzano at 5:59 AM