A Weekend in Los Angeles

Everything was packed on a really early in the morning when I hit the 10 Freeway to head back to my hometown of Los Angeles, CA. I was scheduled for both a promo video shoot at Soultone Cymbals headquarters as well a drumming Master Class at Motherland Music and I was well prepared for both. I had been looking forward to this trip for quite some time because I was not only going to return to the place where my music career began but knew that I would also have a chance to perform for some family members and friends who had last seen me perform in the area back in 2006!

After some personal time with some very special people it was time to get to work even though it was still the day I had arrived to town. I spent some time alone in my hotel room running some rudiments on my practice pad along with some foot exercises on my practice pedals in order to keep myself ready for the business at hand. In other words, I wasn't going to waste a moment doing nothing even when I was that close to doing what I came to town for.

I woke up on Friday May 31 and drove up to Encino to shoot a music video. I was excited because I had been on the Soultone Cymbals artist roster for 10 years now and after what seemed like delay after delay I was finally able to come up and shoot a video in order to do my part to help support this amazing company who has been so good to me.

I was greeted by videographer Tomer Rom and Soultone Cymbals owner Iki Levy. After setting up my cymbals on a DC California drum set (best drum set I have ever played) and a brief sound check I was ready to go. I did a couple of warm up runs and then got the thumbs up to begin my solo. I had decided to do one of my African influenced solos rather than play to a track with a full band because after all, this was me in the video so I figured, why not?

The sound coming from the drums was incredible! Never had a played a drum set before that had such clarity as well as a tone that was second to none. This was a source of relief for me because it is rare to play a drum set other than your own that you are pleased with. The sound really inspired me while I was playing and I think it really showed in my performances. My first take was great and I was pleased with what I did but was Iki Levy who requested that I do a second take and when I did he was even more pleased with that one. I was like, you're the boss so use whichever one you want.

It was great to finally come in and shoot my video that will be featured on the company's You Tube Channel. As always, the people from Soultone Cymbals are just amazing so the time just flew by and before I knew it I was packing my cymbals and heading off to my next destination. I am very excited to see the final product once it is published. 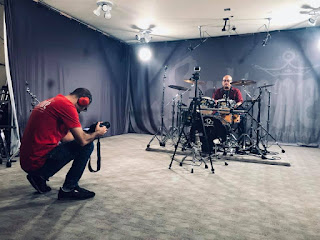 The work of an artist is never over and it's not just with our creative endeavors. We are also always on the go when it comes to promoting our brand so one must always be ready to sell whatever it is that you have to offer. It kind of reminds me of the scene from the movie The Devil's Advocate when Keanu Reeve's character asks Al Pacino's character, Are we negotiating? Pacino's character replies with, Always!

For about a month I have been in contact with members of the Education Department at the Grammy Museum as they had expressed some interest in having me come in to do a drumming Master Class. Since I was going to be in town I figured I would see if I could stop by to say hello and maybe answer any further questions they might have.The nice thing about that was they were not only interested in that but also showed their hospitality to me when they invited me to come as their guest to visit the museum.

It was great to see everything from Grammy trophies to instruments used by icons from the past. Then there were places to watch video performances from past Grammy performances to displays honoring everything from the connection between music & baseball to great performers from various genres to the celebration of films from the past including the classic from my childhood Cheech & Chong's Up in Smoke. I also got a good look at the Clive Davis theater, which is where live performances take place. I can only hope that we are able to come to an agreement that would allow me to come in and share what I do with the museum patrons sometime in the future as it would be an honor to perform is such an amazing place. 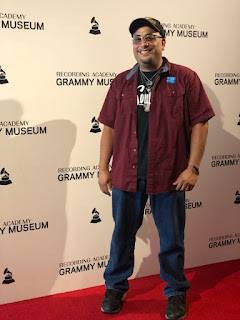 The finale of this musical weekend was to lead a drumming Master Class at Motherland Music in Inglewood, CA on the evening of Saturday June 1. This was something that had been planned for months and when the moment finally arrived I was very excited for a number of reasons. First, I was home and I knew that I was going to be performing for members of my family as well as friends who had already told me that they were coming to the event. Second, I was going to be in an environment that celebrates many of the rhythms that I adapt to the drum set so I was going to be performing for people who knew exactly what I was doing so I was curious to get their feedback because they would certainly have much to tell me in terms of what I could do to improve my playing.

The moment had finally arrived and there I was surrounded by every drum from around the world, which was very inspiring to say the least. The acoustics in the room were incredible so that also led to a certain amount of excitement on my part. It was great to see both new and familiar faces enjoying what I was doing and I must say that it was a nice way to return home after being away for 13 years. I had some great dialogue with those who had questions about what I was doing as well as those who commended my playing. Those who ran the venue were very pleased with my performance and let it be known that they would love to have me back sometime in the future.

Aside from all of the good things that one can almost anticipate from a good performance I must say that my favorite part was seeing the enthusiasm of the next generation of drummers. After I was done I had the thrill of watching my great nephew as well as the young son of a dear friend spend some time beating on my drums. I loved seeing them really dig in to the drums as well as the joy in their faces when they were playing what I think is the best instrument on earth. If I in fact inspired them in any way I will bow my head in gratitude because that would be a great honor itself. Of course I would do anything I could to also guide them in their drumming journey as I never forgot those who did the same for me. 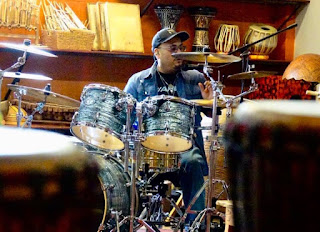 It was great to go home but before I knew it I had packed my drums in my truck and was back on the 10 Freeway. Before heading back to the Arizona desert that I had to make one stop for a special little girl back home who is a big fan of K-POP music. I went to Music Plaza in Korea Town to grab some BTS merch for my daughter as her passion for their music reminds me so much of the bands I followed in my youth. It is so amazing to see this through the eyes of my child as I still remember the joy my mother had when she supported my musical interests back when it was my turn to play fan boy.

After that I had a chance to meet up with David and Alex Gonzalez who are some of my musical brothers from the past who now live in the Palm Desert area. These are some dear friends that I experienced many musical memories with so besides remembering so many good times we also had the joy of just being around each other again and feeling that connection that began many years ago in rehearsal rooms, recording studios and in various live venues all over Southern California . These are moments that one never forgets and I am so grateful to have the chance to catch up with them again as I had not seen them since moving to the Arizona desert back in 2006! 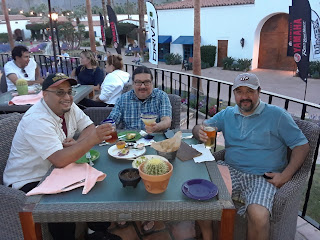 Our reunion took longer to celebrate than expected so I found myself needing a little more sleep before returning home. I made one last stop in Blythe and slept off the exhaustion of a busy weekend before heading back home. I made it home long enough to give my kids a big hug before having to head off to rehearsal with the Tony Corrales Band.

Yes, it was nice to be back in my hometown and to focus on both my music and furthering my own musical career but there is still nothing like being in a band. Being back at Tony's house for rehearsal with my brothers was just as amazing as always because it's never about where we are playing but just the fact that we are making music together. It was good to be home and I was so excited to know that we were going to be back onstage together again the following weekend.

Still, as they asked me about my trip I couldn't help but look back and feel so blessed to have just experienced an amazing weekend with so many people who mean the world to me. I'm not sure of my immediate plans but my heart will always point to where I came from and since so many of my family members and friends had other plans that prevented them from coming to my Master Class I am already working on my return.

Thank you again Los Angeles. I will be back! 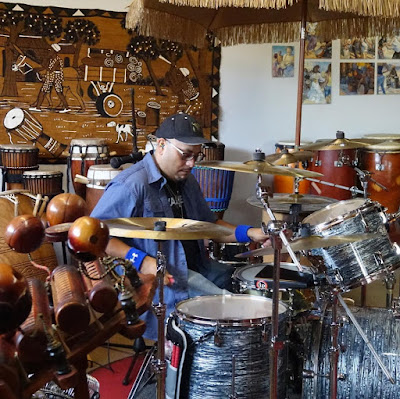 Posted by CSolorzano at 6:35 AM No comments: