A little over ten years ago I borrowed a double CD from a friend of mine by the heavy metal band Iced Earth called The Blessed and the Damned. I was curious to hear this band because I kept seeing their CD's at the music store checking out the Iron Maiden CD's because the artwork always caught my attention. My friend assured me that I would love their music so I was more than excited to throw on disc one when I drove home from work later that day. Right away I was taken by their killer riffs, their catchy melodies and their dark fantasy lyrics and since it was a greatest hits collection I could hear right away that some of the songs featured various musicians due to personnel changes they had over the years.

Then a live version of song called "Travel in Stygian" came on and that was when I really noticed a drummer who just blew me away. Right away I had to look at the song credits and that's when I found out that his name was Brent "Deadly" Smedley. The song started out with a pulsing 12/8 beat that featured some nice ride bell work and some tasteful double bass licks before heading into an up tempo common time riff that had a syncopated feel that Brent drove with straight beat with some cool double bass riffs that doubled the guitar part. After the song went through a few sections it kicked into an even faster section that started with a killer guitar riff before Brent jumped back in with some amazing up tempo grooves that featured some amazing double bass work. Then the song went into a slow section that Brent played tastefully before kicking the song into another gear before they dropped into an amazing up tempo section that Brent drives with some amazing double bass work that is broken up before he pounds away on a tom driven section before the band takes the song home. The song really told a story both lyrically and musically and Brent did an amazing job keeping the entire story together with his masterful performance.

I was officially hooked on this band and wanted to learn more about this amazing drummer. That led me to pick up a copy of Alive in Athens, which featured Brent playing this amazing song along with with live versions of many Iced Earth classics. Brent's drumming is amazing regardless of the setting he is playing in but he really shines in a live setting.

At the time of my discovery I came to find out that Brent was no longer in the band so I was more than pleased when he returned for the Framing Armageddon album in 2007.  The album featured nothing less than what some people expect from an Iced Earth album but as time went on the music became even more dynamic, which demonstrated a band that was growing in its songwriting, which of course, works best when they have a dynamic drummer like Smedley.

I was deeply moved by the moods in song such as "The Clouding" https://www.youtube.com/watch?v=daRJxnlo1zM or those moments when it's just time to rock out and drive that metal machine on a song like "Ten Thousand Strong." https://www.youtube.com/watch?v=dMOtwk9oXjA. Now that Brent was back in the band the foundation was set in stone and there was no way to break down this kingdom.

As time went on the band continued to gel as a unit and Brent's drumming got even better. When the group released the album Dystopia I was blown away by his drumming performance because he delivered what I consider to be one of the best performances ever by a metal drummer. In all the years I have listened to metal music I have heard lots of great drummers deliver some amazing performances but none of them were better than what I heard on Dystopia. Brent really brought his "A" game on that album.

The title track is just perfect and only Brent could have delivered such a dynamic performance: https://www.youtube.com/watch?v=zuwW9IVwZ0U. This was most important because they were about to introduce new singer Stu Block to the band and he is a metal god! But, such a metal god can only rule the landscape of rivet heads if the drummer supporting his throne has the goods to keep him in a elevated position. Brent is the man for the job and if you take one listen to the track you will most likely agree with me when I say that Iced Earth has never sounded better. The rest of the album is fabulous and is to this day my favorite Iced Earth album.

Some other highlights from the album have to include the rocker "Boiling Point" where Smedley drives the conquering tank: https://www.youtube.com/watch?v=EWJ7bUCPKK0 "V,: which has some tricky grooves and some amazing double bass licks between some great lead vocal lines to the complicated epic song "Dark City" which features some amazing drumming by the metal master: https://www.youtube.com/watch?v=3dCDCo3k7sQ

Following the release of Dystopia the band recorded a DVD/CD package called Live in Ancient Kourion. It was amazing to hear the new songs from the Dystopia album live but I was also amazed at how Brent interpreted material from the albums he didn't play on. I was most impressed with the way he performed on tracks like "Wolf" and "Dracula" because they were originally recorded by drummer Richard Christy who is amazing in his own right yet. Brent made these songs his own and it was a pleasure to hear Brent's interpretation of the songs along with how his performance impacted the rest of the band.

Soon after that tour Brent had to step away from the band to take care of some family issues. The band went on to record the amazing Plagues to Babylon album and it was indeed great to hear the band grow all the more in terms of their songwriting with vocalist Stu Block. However, I would be lying if I didn't say that I was ecstatic when it was announced that Smedley would return to the band prior to the recording of their latest album titled Incorruptible.

Right away the new album opens with the epic "Great Heathen Army" and it was such a joy to hear those opening power chords ring out while Smedley's pounding toms announced that "Deadly" Smedley was back! Then into the killer rocking double bass beat before locking into the 12/8 groove on the chorus with the smoothest transition that helped tell the story of this epic song. https://www.youtube.com/watch?v=Q_VbMVwVuhw

Another stand out is "Ghost Dance (Awaken the Ancestors)." Being a drummer who loves World Rhythms and music from other cultures I can say that this song moved my spirit in a way that a metal song never had before. The tom driven part is something we would expect in a song with this kind of theme and it was executed brilliantly. But the groove is just as awesome as the 16th note subdivisions were performed in a way that projected the same feel as the tom part and that is why the entire song feels like a Native American dance. It is a brilliant performance: https://www.youtube.com/watch?v=Dy-T8ZHBNEE

One final song I'd like to highlight is "Clear the Way (December 13, 1862)." The opening part totally has an Irish feel and it is funky! But once that main groove kicks in it's time to rock. The later grooves maintain that Irish feel thanks again to the way Smedley plays the 16th note subdivisions. I think it's safe to say that on this album he didn't just perform well but offered a performance that helped tell the story of the songs. That is not typical of every drummer out there: https://www.youtube.com/watch?v=wmljtVrxul0

It's good to have you back man! You are one of the best ever in the heavy metal genre and I look forward to many more years of not only enjoying your drumming but learning from your drumming. 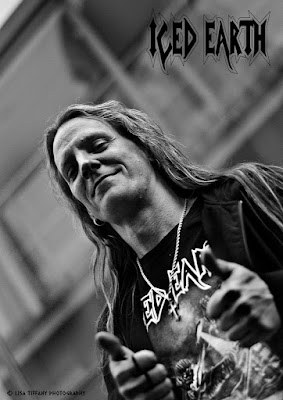 Posted by CSolorzano at 5:13 PM