Growing up in a house with Arthur Solorzano meant that I had the privilege to hear lots of great mushc. One of his favorite genres was Latin Jazz with one of his favorite artists being the great Tito Puente. Puente was of course a master percussionist but also a brilliant composer and arranger and there was no better setting to listen to him than in a live setting. Aside from being a brilliant all around musician he also had a world class band so each show was an event to say the least. One listen to one of my father's favorite albums, which is titled El Rey, says it all: https://www.youtube.com/watch?v=o4T0XjQ4WaE

In my life I had the chance to see him perform three times. The first time was when I went with my parents to see him at the Marsee Auditorium at El Camino Community College during my senior year of high school. They band did two sets of all of our favorite songs and they were simply amazing. Watching Puente play his timbales along with the marimba and vibes allowed me to be in the presence of a true musical master.

I would see him two more times in 1996. The first time was when I went with my then fiancee (and yes, she did marry me) to the House of Blues in West Hollywood to see him in a club setting. That was probably the best performance of all because I could tell how much he loved playing in clubs. The last time was at the Hollywood Bowl with his All Star Band. It was a great show as he took a different approach since he was working with other musicians. He seemed to put more emphasis on jazz tunes but that awesome Latin groove was still there.

Since Puente was always blaring through my father's speakers I am proud to say that his music was a big influence on me. Even though I didn't necessarily go into the Latin genre exclusively I learned so much from the way he played his instruments as he taught me a lot about what it was like to play with great musical taste.

Many times I have stated that drummers who also play harmonic instruments have a different approach to their drumming because they have a musical vocabulary that most drummers have no knowledge of. Who better than Tito Puente to exemplify such an idea since he was in fact not only the band leader but also the guy putting the charts together? It really warms my heart to see a percussionist have such an influence on the musical world because there are too many times when we are seen as the red headed step child in the band.

Puente was indeed a rare breed. His career spanned over fifty years, he won five Grammy awards, appeared on over one hundred albums and had such a great band that he was known as "One Take Tito" in the recording studio. It's amazing to read the CD credits and see that his albums were at times recorded and mixed in 2-3 days!

Show us how it's done Tito!

One of the things I admired most about Puente was the way he would phrase his solos. He didn't just rip away as his timbale solos told a story. If you go to the above link and listen to his solos on "Ran Kan Kan" (track 3) and on "El Rel del Timbal" (track 9) you can hear that he is not only a great drummer but also a musical composer on the drum. Of course that doesn't mean that Puente couldn't throw down with the best of them but the nice thing about Latin music is that there is always an emphasis on playing in harmony with others so one usually solos while being accompanied by other percussionists. Check out these classic solos from early in Puente's career:

Puente was a genius with the mallets. His performances on the vibes and marimba were second to none as he certainly had a style all his own. Since these are melodic instruments we see more than his ability to phrase on a percussion instrument. Puente's brilliance was in his ability to create pieces of music that were most memorable as he created moods that took the listener on a beautiful journey.

I am not the biggest fan of traditional swing jazz because of my Latin jazz upbringing. Truth be told, I would rather focus on tunes with Latin grooves than swing grooves as those get old for me real fast. Sometimes this caused tension for me when I played gigs in a jazz standard group because I preferred to play the tunes the way Puente arranged them than the traditional arrangements that were released decades earlier. Of course the tunes in themselves are beautiful pieces of music but it was always hard for me to go back to the original version when Puente's arrangements were the first ones that I was exposed to.

Take a look at these three standard classics. Each song in their original form was amazing in their own right but Puente took them to another level. "Take Six" is Puente's arrangement of Dave Brubeck's "Take Five," which of course is a song that was already memorable thanks to its rhythmic dimension. After all, who wrote jazz songs in 5/4 time? Puente took it to the next level by adapting it to the Afro-Cuban genre. Same thing with classic "Killer Joe."

"Spain" in itself was already a beautiful classic. I have heard the great Chick Corea record this in various ways with some amazing musicians who helped him offer a different approach for each generation. Meanwhile, Puente takes it and arranges it in a way that makes one feel like an Afro-Cuban musician collaborated with a Spanish composer somewhere in Barcelona. Absolutely brilliant!

There are times when one just have to let it go. Nothing is more exciting than a Latin song that just moves. Of course Puente knew exactly how to do this because of his musical knowledge both as a composer & arranger and as a multi-percussionist.

Dance of the Headhunters: https://www.youtube.com/watch?v=RHZwuN5u2aA 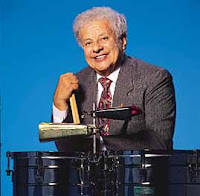 El Rey was special and I am so grateful that my father shared his love for Puente's music with me because he has taught me so much about music. Every time I listen to his music I learn something new and that is saying something because I am in my forties and do not know a day in my life when I didn't have this man's music around me.

I play mostly drum set so I didn't exactly follow the same path as Puente but rhythm is universal and I have learned so much about how to feel rhythm and how to put rhythms together thanks to Puente. I think my proudest moment as a fan was in college when a classmate of mine named Victor Wheeler did a timbale duet with me in one of our music classes. We performed our arrangement of "Four by Two" and it brought the house down. The best part about it was that people walked out of the theater that day humming the main rhythm, which brought big smiles to our faces because they were really feeling what we had just played.

It's hard to believe that June 1 of this year will be sixteen years since Puente has passed away. I remember the morning he passed because my father called me when I was still asleep to give me the news. I thanked him for letting me know but it didn't really hit me until later that day. I had decided to take some of his music with me to listen to on the way to work and it was actually on my drive home when it finally sank in. I was listening to a song titled "Son Con Son" from his 100th album as that song has one of the best grooves I have ever heard. As the groove moved my heart I could now feel the loss. Thankfully I was close to home because I began to sob. Not only had the world lost one of our greatest musical treasures but a piece of my upbringing was now gone. Music would never be the same for me.

Thank you Tito for all of the treasures you gave to us. Rest in peace Maestro!