Everyone knows the story...I made the decision to take a big step out of the local country music scene with the intention of only working in more intimate settings with my jazz trio Sonoran Sol while spending more time at home with my family while doing more non-musical things. It seemed to be the right thing to do at the time and I was looking forward to making some changes in my life.

That was until my my brother from another mother, Tony Corrales contacted me two weeks into my semi-hiatus with his plans to put the Tony Corrales Band back together. It was not a phone call I expected but as everyone knows, if there was one reason to change my plans it would be to rejoin my brothers in the band that I had been with for over 5 years! After all, we had already been through so much together and through those ups and downs we had established not only an amazing musical chemistry but a personal bond that was unbreakable.

From the moment we started rehearsing again...the magic was back! Playing that first song with the guys again was a real homecoming for me as my heart was filled with joy. After a few more rehearsals we found ourselves back in the Tropico Lounge at the Casino del Sol before a big crowd of country music fans who had waited over a year to see the band again. Once we hit the stage it was just like it had been before, which was five guys acting as one as we performed our hearts out for the good people who came to see us. Nothing makes us happier than seeing a dance floor full of happy people who were just as happy to see us as we were to see them.

We were all home!

Hearing Tony's voice fill the stage again was not only a treat for our fan base but also for his drummer who always loved backing up that sweet manly sound. Then there was Joey Cota and his amazing guitar licks that take our upbeat songs over the top while adding nice layers to those sweet buckle polisher ballads. Of course you can't forget Robert Rojas and his solid acoustic guitar work along with his amazing vocals both as a background & lead vocalist. Finally, there is my rhythm section partner in crime Alex Quinonez whose thumping bass lines help me keep that dance floor moving while his beautiful back up harmonies complete the sound of the band.

Was it possible for me to be any happier?

The answer was yes! For the longest time the boss man had wanted to add a fiddle to the sound of the band and it finally happened when he met a lovely little lady named Rose Springfield-Briones.  It didn't take long for her to come in and add so much to the band's sound with her fiddle work as well as her vocals. Aside from that, she's a little firecracker at times as she knows how to handle us crazy fools thanks to her incredible sense of humor and quick wit. In other words, she fit right in!

The first gig we did as a sextet was at a private wedding party back at Casino del Sol. It was a nice way for all of us to feel each other out as it was Rose's first gig with the band and only Alex's second gig. Still, we sounded great and could see that we were really on to something. Soon we would back in the Tropico Lounge for an eager crowd who had heard whispers of a new member added to the group. Rose did not disappoint as everyone saw just how talented she was. This led so many people to say that they band never sounded better and I can assure you all that the rest of us felt the same way.

Rose's fiddle and background vocals added so much color to the sound of the band. The best part about it though was that it brought even more out of the rest of us. Some of my favorite things to watch are when her and Joey switch off on solos on the more up tempo songs. Not only are they lighting up the stage but they are pushing Alex, Robert and me to hit the groove even harder, which rocks the dance floor even more. The energy that this band is producing now is something that none of us have experienced in the past and in a lot of ways we're still just getting started.

Our next performance would be at the Monsoon Club at the Desert Diamond Casino on a night where the local monsoon weather (no pun intended) made its presence known. Early in our set the power went out for a moment before the back up generators allowed the show to go on but we suspected that the storm was not quite done with us. When the power went out again there was a moment of spontaneity when Rose looked over at me and suggested that we do something for the audience in order to get their minds off of the darkened room. We went into a special jam of "Orange Blossom Special" and that's when everyone in the room, including the other members of TCB saw just how amazing this little lady was. Eventually Joey would also join in with one of his blazing solos while Robert, Alex and me threw that groove down. The audience went crazy and that energy pretty much carried us through the rest of the night.

Then we performed in Sonoita, AZ at the Copper Brothel Brewery and let me tell you, this was a change of scenery. Not only were we in wine country but we were in a much smaller place performing for the locals who came out to have a great time. We continued to work as a unit as we had to pay close attention to our volume and our dynamics. That was the least of my concerns because I had no doubt of the professionalism of my band mates. I was more curious to see how the locals would respond to the band.

Let me tell you, that was a big party! People were up and dancing anywhere they could. At times they were even sliding through the empty spaces between tables where people were dining for the evening. We had as much fun as we did at any casino gig as this crowd brought some serious energy with them. We can't wait to go back there again.

Of course we recently did another show at the Tropico Lounge at CDS and once again, had a great time performing for another amazing crowd.  This time everyone got to see Rose sing a few lead vocals along with a couple of duets with Tony so once again, TCB showed that we are are expanding our sound as a band. That and the fact that the band is getting tighter both as a musical unit as well as a family.

Music is a cut throat business and that's really sad because the relationships that come from being in a band can be really special. Experience prepares you for such things but it's still disappointing to see how some people go about their business because one day you're the best of friends (usually because they are happy that your talents are making them look good) and then the next day you become a liability that they can't wait to kick you to the curb.

The special thing about this band is that everyone is a good person first and then we can talk about their musical abilities. Alex and Rose are the most recent additions to our band family and immediately saw the culture that Tony created within the group: once you're in, you're in! You are valued, you are respected and your feelings matter to everyone! Even our former members mean just as much to us as they did when they were in the band because they are still part of the family (Big hello to Thomas, Mike & AJ...miss and love you guys).

The adventure continues as we not only have some gigs booked next month but are hitting the road for the first time in years! First, we are heading to Las Cruces, NM to perform at a wedding. I am really looking forward to this not only to perform in a new place but wondering what it's going to be like to hit the road for a couple of days with these crazy people.  Then we're back in AZ but will be down in Douglas as we were invited to headline a Saturday night gig at the Cochise County Fair. Again, this is going to be a blast and another trip into the unknown with my band family.

As I look toward the end of the year we will be back at the Tropico Lounge at CDS and at the Copper Brothel Brewery and while I am looking forward to those gigs I must say that there are a couple of gigs on our calendar in a familiar place that warms my heart. We will end the year returning to the Outlaw Saloon, which is where it all started for TCB. We have performed so many gigs there in the past and to finally come back home will be such a treat for all of us. I can't wait for those good folks to see how we sound now with Alex and Rose while the newest additions to our band family receive the welcome I know they will get from those at the Outlaw Saloon who love TCB.

Someone recently told me that I have never sounded happier about being in this band. They were right and as time goes on I know that my happiness will increase all the more.  Never have I felt more blessed to be in a band than I feel right now being back where I belong. 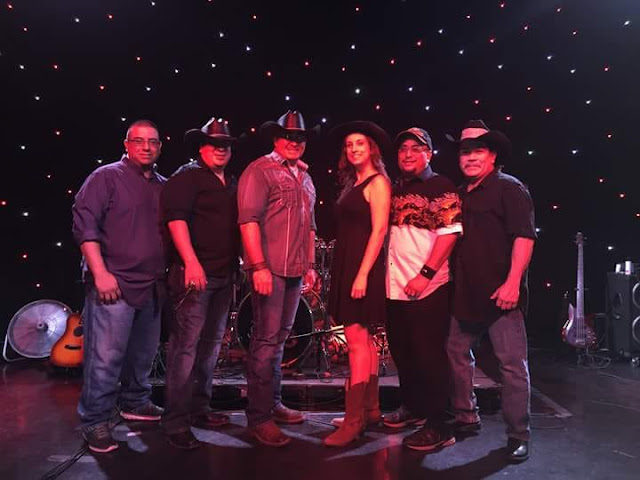 Posted by CSolorzano at 8:19 AM