Feeling the Groove and Soul of Sonoran Sol

After a bit of a break my Jazz/Fusion/Funk band Sonoran Sol will be hitting the stage again real soon. Our last show was at the Main Gate Summer Concert Series and it was a great night. Even though we had some rain postpone our start time our set was a great one as we were excited to play an outdoor gig for a large audience who was totally into what we were doing. Interestingly enough, this was the gig that caused me to pull the band out of mothballs but I have to say that there is so much more to be grateful for than this great night.

My band mates are awesome and it all starts with guitarist Dan Griffin, who I have known since moving to the Old Pueblo in the summer of 2006. From the early days of the this band he has pretty much been there and his contribution to the group is something that cannot be put into words. When we play out people see an amazing guitarist who shows a true knowledge of the instrument...but that is just the beginning. Dan acts more or less as the musical director of the group as he puts the charts together while also throwing suggestions for songs that always bring excitement to our shows. He is also a good person to bounce ideas off of when it comes to the business end of things (that's my domain) so you can say that he is the consummate professional.

Bassist Bobby Elias has been a shot in the arm for the group, which is most interesting because this is the first time we have committed to working as a trio. Dan has known and worked with Bobby for many years and said that he knew the two of us would click as a rhythm section. I am more than happy to say that he was right because from the get go we have had a blast playing together. When we groove we groove and I am always surprised at the amount of energy that the two of us create, before Dan tears it up with his amazing guitar licks.

If someone asked me how I felt about taking this group back out into the performance world I would say that I am grateful. You see, for many years it was really hard to book gigs for an instrumental group and being a musician who loves to stretch himself from time to time I always missed doing these type of shows. However, when I was contacted by Jonas Hunter to see if my group would be interested in performing for this amazing summer concert series I figured it was time to give it another shot in order to see what was out there.

Dan and I decided to make a demo that featured some excerpts from a couple of the songs that we play and once I had that ready to go I started to hit up some local venues. I was hopeful because many of these venues were not around during the band's last run so perhaps our sound would make a good impression on them. To my surprise many of them were very interested in the band and offered dates right away. Therefore, we were booked for several gigs before the impending summer gig.

We started with an appearance on The Morning Blend television show on KGUN here in Tucson thanks to the fact that I had done some solo drumming appearances in the past. I figured it would be a great way to market the band while also getting some free video links out of it.

I was more than happy to see how much of an impact it made because once I had those links in my back pocket I was able to get even more shows. Many of the booking agents liked our energy and the fact that we were doing something different from so many other jazz bands here in town. I've always been someone who was willing to step outside of the box so I was more than happy at such a response but I have to give a nod to Dan on that one because his musical vocabulary is off the charts and he has always suggested we play some great tunes that not only have a great groove but also have a certain edge to them.

So we started to hit the stage and from the get go it has been a blast. We hit places likes Bear Track U, The Artful Space, Royal Sun, Growler's Taphouse, Noble Hops Gastropub, and then also performed at some great events like the Family Friendly Cinco de Mayo Celebration at Tohono Chul Park and of course, the Main Gate Summer Concert Series at Geronimo Plaza. Each of these shows were a great time as I got to play some great music with some great band mates while also stretching myself as a drummer.

First off, I've done a lot of country gigs these past six years and while I continue to do that (and yes, I love these gigs) Sonoran Sol's set list requires me to have a totally different approach to the instrument. Country gigs are all about precision and timing as I am responsible for keeping the dance floor moving. However, with Sonoran Sol there are bounce beats, shuffles, Latin grooves, Funk and some of those really out there fusion beats. Syncopation is the name of the game with dynamics playing a huge part in everything that we do. Out in the audience we have fans of instrumental music, musicians who watch every move we make and, my favorite people to watch, those who get up and dance! In other words, the diversity of what we play is off the charts.

It's a different world from my gigs with the Tony Corrales Band and I absolutely love it. Sometimes I am asked which gig I prefer and the truth is there is no right or wrong answer. It's music and anyone who knows me is aware of the fact that music is a deep passion of mine with my musical vocabulary including not only Country and Jazz/Fusion/Funk but also Rock, Heavy Metal, Progressive, R & B, Pop, Classical, World Music and just about anything else out there that has a good groove. It's like eating fine food. There are so many ways to prepare a great meal and thanks to the diversity of cultures in our world we have so much to choose from. The same thing applies to music and to me it's all about feeling a connection to what I am playing. In this case, the connection is there both to the music I play with the group as well as my band mates.

So as we come to the end of August I am excited because I know that I am about to start my fall run with Sonoran Sol. It all starts on September 16 at Noble Hops Gastropub in Oro Valley and we hope to see you all there. 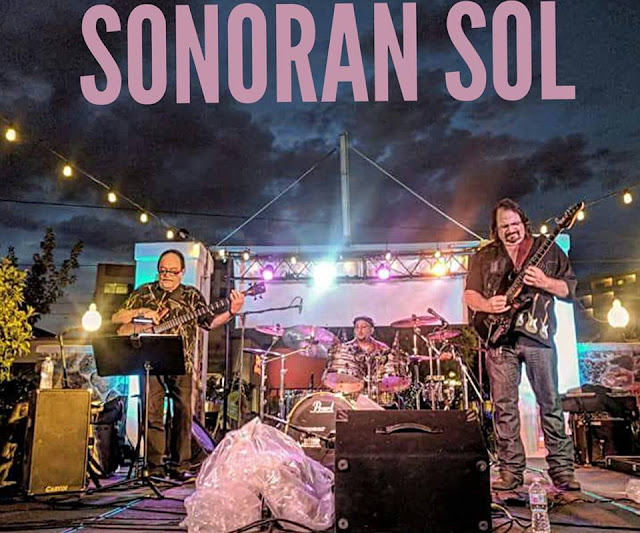 Posted by CSolorzano at 6:13 AM