Ten Songs That Changed My Life as a Drummer

This was something I tried to avoid doing because I thought it would be really hard to narrow the list down to ten songs. Then I was driving home one day when one of these songs came on the radio so I knew it was time to at least give it a try. Once I made that decision I found myself being pulled to the songs that really impacted me as a drummer so here is my list of songs that had the biggest impact on me as a drummer:


1) "Elvis is Dead" by Living Colour
When I was in college I was talking with a friend about some popular bands and that was when Living Colour came up. I mentioned that I liked the songs that I heard on the radio and on MTV but had yet to check out their albums. At the time I was a poor college kid so I went to a used record shop and picked up their first two albums on cassette for $3.00 each. My life as a drummer would never be the same.

To this day I believe that their second album Time's Up is one of the greatest Rock and Roll albums of all time due to the quality of songs as well as the diversity of influences that gave each song its own identity. Aside from that I was always amazed how this diverse collection of songs still seemed to work in terms of giving the album its own unique identity. Still, there was a particular song on that album that really blew my mind and it was "Elvis is Dead." It's a fun song with a great groove that grabbed me in the most unique way. At this time in my life I was a rocker with a huge drum set but once I heard drummer Will Cahoun lay down that powerful and soul filled groove it just took my breath away. Soon I would redefine my playing from using a smaller set up to seeking the path of the grove in a way that I never expected: https://www.youtube.com/watch?v=8nvpRkn_R5g


2) "From Within (from Calle 54)" by Michel Camilo
Many years ago I read an interview in Modern Drummer Magazine about Cuban drummer Horacio "El Negro" Hernandez before ever hearing him play a note. Once I got an idea of what he was like as a player I immediately sought out any song he performed on. I was totally intrigued by the way he played Latin music but was very inspired by his drum set, which featured lots of Latin percussion, including a foot mounted cowbell.

The first time I heard this brilliant song I was completely blown away. How does a drummer play like this? How does a human being perform all of these rhythms and do it with such a great feel? Obviously Hernandez is a master of his craft and it is fair to say that there is not a drummer on the planet that comes to close to playing the way he does. To this day his playing has had the biggest influence on my solo drumming act because no one orchestrates rhythms around the drum set like "El Negro:" https://www.youtube.com/watch?v=HXy5I52FVCA


3) "Un Poco Loco" by Tito Puente
Growing up in my father's house one would hear Maestro Puente almost daily. There are so many songs I can boast about but this one in particular has always caught my attention because it's not only a great song with a great groove but is completely driven by the percussion section. Further, the percussion section goes beyond just playing traditional Latin rhythms as they also play some creative percussion arrangements that are not common in any type of music.

The musicianship in Puente's groups were always second to none but this song just cooks. The non-percussionists are at their usual stellar best but the percussion section refuses to let up throughout the entire song. I always put this song on when I need a kick and it never fails to get me moving: https://www.youtube.com/watch?v=IRDvkcJcIw8


4) "About Time" by The Estrada Brothers Band
Sometimes world class musicians are not necessarily known on a global scale and to me that is just a crime because their brilliance deserves more recognition. The first time I heard Ruben "Cougar" Estrada's performance on this track I almost crashed my car because I heard it on the radio while I was out delivering pizzas. Immediately I went out and bought the CD and am still amazed at Cougar's performance on this song.

I had never heard a drummer on the set drive a Latin band like this before and to me it was such a defining moment in music history because it proclaimed to the world that a great Latin band could do its thing without the traditional percussion set up. There is something so beautiful and brilliant with the way Cougar plays the cymbals, which in turn gives the vibes the room it needs to sing. Cougar's solos are both tasteful and powerful within the context of the song because the song never loses its groove: https://www.youtube.com/watch?v=c891rOf62p0


5) "Diansa" by Mamady Keita
The first time I heard this track I didn't know drums could sound so beautiful while also having a powerful presence. For years I have believed that old world drums that are made of hollowed out trees with goat skin were far superior in sound to drums made by today's modern drum makers. As far as I'm concerned this song confirmed my opinion.

Then you hear these drums in the possession of master drummers like Keita along with his ensemble and you have a masterful performance that takes you into another universe. Being a Westerner I am totally privileged because this journey could only happen if I take the time to listen to the master drummers of Africa because they come from a totally different world when it comes to rhythm: https://www.youtube.com/watch?v=H1Iw2pZ2Lt8


6) "Don't You Forget About Me by Simple Minds
Fact: the drummer is the most important member of the group and this song is one of many that proves it. Here we have a cool 80's song with nice pop sensibilities and a great vocal performance but what would it be without Mel Gaynor's amazing groove? The groove is solid and pushes the song forward with a feel that actually allows the song not to sound as simple as it is. Meanwhile, Gaynor's hi-hat work is slick and sweet and adds a great dimension to a song that many people probably would have programmed back in the day. Again, more evidence that a human drummer with a nice groove will always take your song to the next level: https://www.youtube.com/watch?v=CdqoNKCCt7A


7) "P. Y. T. (Pretty Young Thing) by Michael Jackson
Michael Jackson's death was such a loss to the music world but at least we have so many great recordings that he left behind. My personal favorites are the ones that featured drummer Ndugu Chancler. This particular song as well as "Billie Jean" are the most famous tracks that he played on thanks to Chancler's special groove. What's amazing about this song is that it's so simple yet how many drummers could actually lay down a groove like this guy? It's a very special and timeless performance: https://www.youtube.com/watch?v=5B0itw6rmmI


8) "Touissaint L'Overture (Live in Mexico)" by Santana
Another staple in my family's home during my upbringing was Carlos Santana and other Chicano rockers. My favorite songs were always the ones where they just let it go. This tune has very little vocals but it's all about the groove along with some serious guitar work by El Maestro himself.

Big kudos to drummer Walfredo Reyes, Jr., Congeuro Raul Rekow and Timbalero Karl Perrazo. Aside from the amazing groove that is all over the song there is also some amazing soloing that just takes my breath away. To me this is the most epic song Santana ever delivered and it's thanks to the drumming that takes this song to such a special place: https://www.youtube.com/watch?v=mDJ0TclGEn4


9) "I Still Love You" by KISS
This is song is yet another example of the importance of  having a great drummer. Here we have a power ballad that has the late Eric Carr playing a tasteful groove in support of the verses before delivering some powerful fills on the choruses that not only fill in the gaps but to also support the agony expressed in the vocal performance.

Another thing to mention is the musicality of Carr's fills. This comes from the fact that Carr was also an instrumentalist who understood the language of harmonic instruments and once drummers dare to explore that world it changes their drumming forever. To further emphasize the point of the complete musician that Carr was it must be stated that he also played the bass guitar on this particular recording. Therefore, Eric Carr was not only the drummer but the complete rhythms section on this song: https://www.youtube.com/watch?v=mvEKyeVu1ks


10) "Powerslave" by Iron Maiden
What happens when a metal drummer with experience playing other styles of music joins a super metal group? You get a classic track like this one and many more. I have played this song for friends of mine who like hip hop and R & B and they never fail to comment on the groove because this metal song actually has a lot of soul. Nicko McBrain is the man to produce such brilliance and there is not a drummer on this planet that can duplicate his performance.

Aside from the great groove that is throughout the song McBrain also handles the dynamics of the middle section with great musicianship as he helps take the song to a special place. This is one of the most famous songs in the catalog of the Mighty Maiden because it rocks, it has great musicianship and it takes the listener on a journey that they are accustomed to hearing from the greatest heavy metal band in history: https://www.youtube.com/watch?v=TzrfJsIQNrg 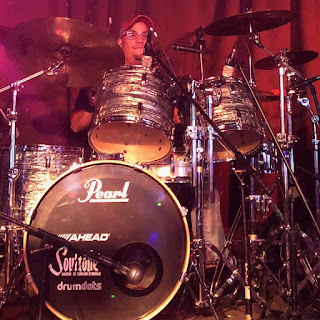 Posted by CSolorzano at 2:10 PM