There is a saying among working musicians that you always have to keep an eye out for your next gig because one can never know what's going to happen today or tomorrow in this business. Sometimes you have to even go as far as creating your next opportunity and that's what led to the formation of the group Badlands.

It actually started one fateful night at the Outlaw Saloon here in Tucson, AZ. The Tony Corrales Band was performing there yet again and lead guitarist Joey Cota invited vocalist Abelino Sanchez to join us onstage for a couple of songs. Tony being the supportive gentleman that he has always been allowed Abelino to come up for two songs, which were Blue Ain't Your Color and Neon Moon. Oh my....was the response both from the audience as well as the rest of the band as the brother had some pipes on him. Aside from that, his demeanor also showed someone that was very comfortable onstage that could only come from having a lot of experience as a performer.

The reason for this impromptu jam was because Joey and I had been talking about putting together a Top 40 band on the side in order to get more work in the local music scene. TCB was performing at the most a few dates a month so we wanted to put together another group to fill in our calendars a bit more. The short lived jam seemed like a good start but the truth is, it wasn't the right time or the right approach. Still, we knew that there was something there so we decided to just wait and see.

Fast forward a few months and the Tucson country scene was surprised at Tony's announcement that he was walking away from the stage both for personal and health reasons. It wasn't an easy thing for the whole band to go through but the first thing we all thought about was the health and well being of our brother and not if the band was going to continue. That is why we're all still in touch to this day with Tony offering his support and encouragement to the rest of us to get out there and do our thing.

Once we realized that TCB was going to be on the shelf Joey and I immediately talked about working together in another band as our seven years of working together had created both a musical and personal bond that you can't find with a new musical partner. All of this experience together created a level of trust that you can't find with another group because no matter how professional they might be you cannot duplicate the connection that comes from not only making music together but also going through all of the off stage things that happen when you are part of a band for an extended amount of time.

The first thought that came to mind was the idea of remaining in the local country music scene because it is a whole lot of fun being able to perform at so many great venues that feature both a great staff along with the amazing folks that come in to check out the bands. Joey and I talked about all of the years we put our hearts and souls into all of the gigs we had played and wanted to remain in the scene that we had both grown to love. Thankfully the venue owners didn't forget all of our efforts so when we decided to put a new band together it didn't take long for these venues to offer some dates thanks to their good faith in not only what Joey and I had done with past bands but also in the quality that they knew we would always bring to the stage. Of course, once we told them who was also a part of this new band they were more than excited to check out the sound of what was being called Badlands!

The first person we needed to bring in was our TCB band mate Robert Rojas on guitar/keyboards and vocals. Robert is a great talent with a great ear for musical detail. He is also a great songwriter that has already started working on some new ideas that sound amazing so we are looking forward to taking some creative turns with out musical brother.

Second was bassist/vocalist AJ Gonzales who is not only the original bassist from TCB but also someone I have worked with for over ten years in several bands both live and in the studio. To have a bassist there who already knows my every musical move providing the foundation of the groove with me will certainly give the band a strong musical presence.

Then there is vocalist and then I later found out, guitarist Abelino Sanchez. I already knew he was a great singer but once I saw him play guitar I knew we had something special on our hands. Aside from him being an experienced pro he was also hungry to take a different turn in his own musical life. He had been performing in various other settings for years but now wanted to start performing in the country music scene so his timing couldn't be more perfect.

Aside from that, we also wanted to expand the sound of the band. Yes, the majority of what we are doing is country but this is Tucson and being close to the southern border we know that the audience likes not only country, which includes some of the modern songs that have elements of rock and pop, but also some Latin songs that everyone in this town love to dance to. With Abelino being such a diverse singer we could hear right away in our early rehearsals how much more we can broaden our set list. Being a drummer I was more than happy to add some cowbells to my set up in order to knock out some of those Latin rhythms.

The first rehearsals showed the immediate potential of the band as even those rough moments featured some great energy and enthusiasm. As time went on everyone continued doing their homework so as we progressed we sounded better each day and couldn't wait to hit the stage.

The first few shows were at some familiar spots such as Eddie's Cocktails, The Maverick as well as the Outlaw Saloon. Each gig was a great time had by all as we brought our best to the stage while the audience response was awesome. Immediate reactions were not only that people liked the band but that they also heard something different; something that was not heard in any other local band that this local music scene needed. I can guess that it came from the unique sound of Abelino's voice with the rest of the band adding our unique interpretations of the songs that they were already familiar with. Also, the Latin songs we chose to perform were songs that most bands don't play live so again, something new and refreshing.

After the first round of gigs we had a band meeting to evaluate what we had accomplished so far. No one was afraid to be honest both with ourselves and with each other as our collective attitude was that we had to do what was best for the sound and presentation of the band. Notes were taken, adjustments were made and the band was now ready to go out for our next round of shows at our familiar night spots knowing that we also had bookings at even more venues including Whiskey Roads, the Copper Brothel Brewery and Casino del Sol to name a few.

The future is looking bright as we are very excited to see where things will go through the year 2020. We are having a great time working together and are so blessed to have the support from those who have supported both TCB and other bands that many of us have worked with over the past several years. That is the most important thing because when people give you their time you must honor that by giving them the best show possible.

....and we are just getting started!

You can follow us and get regular updates at:  https://www.facebook.com/BadlandsTucson/ 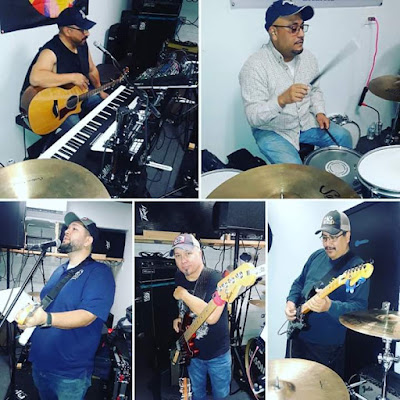 Posted by CSolorzano at 4:42 AM