Time For a Change

For the past 5 years it's been non-stop for me with gigs and more gigs in the Tucson Country Music Scene. Nothing makes a working musician happier than to be on the go and working with other great musicians on a regular basis. I have been blessed to work with so many great bands while also meeting some amazing people that work at the local music venues as well as those who patronize these venues. The support that I have received from so many people has been overwhelming and I cannot put into words how much it has meant to me. Such people have honestly become family to me as I love them all very much.

However, the one thing that many people in the crowd do not know is that many of the musicians who are onstage each night are also people with families as well as artists who have their own creative endeavors that are usually set aside in order to focus on making their working band the best it can be. I was more than happy to do this for the time that I did it but I have reached a point where I can no longer ignore the things that matter so much to me.

The first sign that something had to give was one busy weekend when I had left home for yet another show and saw the look on my children's faces when I said goodbye to them. I was tired from the show the night before so I spent most of the day resting, which also meant that I didn't spend a lot of quality time with them. Even though my kids were used to their father being a working musician their facial expressions told me that my absence was beginning to weigh on them and I was starting to see the same facial expression all too often. This was because my performance had been the busiest that it had ever been and I was doing this while I continued to work a regular career outside of music.

At times I didn't worry too much about being away from home because my performances usually began at a time when my children were already in bed. But there was one thing I didn't think about and I am ashamed to say, was something that showed how selfish I had beacome. My wife is a principal and there are times when she comes home late. Sometimes her schedule was such that if I had a Friday evening gig I would leave for my show before she would get home from work. That meant I would only see her briefly that Friday morning before we both left for work and not see her again until the following Saturday morning when I am far from focused on anything other than a huge cup of coffee. And like most families, our Saturdays are filled with errands and chores to do around the house so that led me to ask the big question: How much quality time did I have with my wife?

Something had to give.

On a creative level I still compose my own music while also writing books & blogs and since I have a full time job a lot of my free time was used to gig and learn new material for these gigs. I always enjoyed the performing experience while also making that extra money but the artist inside of me was dying to get out and my schedule was not giving me the chance to fully express myself. Right now I have all of this music inside of me that needs to get out and more literary ideas that need my full attention. Aside from that, I was also not putting enough attention into promoting the books that I already had out so that's not going to get my literary works anywhere if I just have them out there and do nothing to get them into the hands of more readers.

Something had to give.

On December 18, 2017 I slipped on the stairs at my home, rolled my ankle and heard a pop before feeling a pain that I had never experienced before. This greatly concerned me since the injury took place on the right side of my body, which is the side of my main bass drum foot. Then I became very concerned when I found out that I actually did break the lower part of my shin bone. It was now time to focus on healing and that meant that I would be confined to my home (when I wasn't walking around on crutches at work) and since my mobility was very limited it also meant that I had a lot of time to sit and think...and these moments of self-reflection were not always comfortable.

That doesn't mean that each moment was one of sadness or regret. In fact, while I was laid up I had to find things to do and while I was unable to play a drum set (I still did some work on a practice pad) I was not unable to sit at my laptop and get back to writing stories and blogs. I was also able to sit with my guitar, bass guitar, keyboards and/or drum machine and start composing music again. It felt good to be able to spend time doing such things again and they served as a great distraction to any discomfort that had been caused by my injury. There were so many moments when I was so lost in what I was doing that I had to actually look at my leg to remind myself that I was either in a splint or a walking boot. Most importantly, I was able to do this while I was... home with my family!

Once I got the taste of this again it was hard to go back to such an intense performance schedule. Still, to walk away from a scene that has meant so much to me will not be easy because no decisions are made without some sort of sacrifice. Growth cannot happen without some experience of pain so while I look forward to my creative future I am also sad that I will miss more good times that were certain to come. Still, nothing is more important to me than my family so while failures and longings are certain to come they will also occur while I am with those who have missed me and worried so much about me during these late nights away so how could that be a bad thing?

Finally, I have already  been asked by several people if I am walking away from performing for good and the answer is no. It is true that I am going to focus more on my creative projects but I still plan to continue performing once I am fully healed up. The only thing I can say is that I won't be out gigging as much as I have these past few years but still, performing is part of who I am so there is no point in denying that part of my being. So here are my future plans, for now:

1) To continue composing more tribal drumming songs along with more of my instrumental tracks. I have so many unfinished songs that need to be completed and now that I have already upgraded some of my gear I am really excited to see how all of this material comes out. I also plan to get back into the music licensing world as one of the great honors of my music career has been when my music has been featured on various television shows around the world.

2) Working on some new drum set ideas and composing more drum set solos that will be posted on You Tube once they are completed. I also plan to get back into doing more drumming exhibitions and master classes.

3) Doing more session work for Richard Newell at Alegria Productions and probably more fill in gigs from time to time since there will be a big change in my availability.  I am also on call for some other recording studios in town so it will be nice to be able to do more work in the recording studio.

4) I was recently contacted by a promotion company that I had worked for in the past to do a Latin Jazz gig this summer. That led me to call on some musicians I worked with in the past in a  Jazz/Fusion combo called Sonoran Sol to see if they wanted to pull the band out of mothballs for this gig and possibly for some other gigs from time to time and they were all for it.

5) Then there are the surprises that are certain to come. Once I went down with my injury many of my musician friends contacted me to see how I was doing. It was really good to hear from them as it has been quite a while since I had spoken to some of them so their concern meant a lot to me. Aside from that, some ideas were exchanged as I was asked of my future plans. All I can say is that if any of these ideas come to fruition it could be an exciting time because it would mean that I get a chance to get back into playing other styles of music that I haven't played for quite some time with some dear friends that I have missed greatly.

Regardless of what happens I know that most of my musical work will now be done at home so I will be much closer to my family. Since I am an early riser I have already committed to working on my music before my kids get out of bed and after they are asleep for the night. My future gigs won't be as often and most likely end earlier than the gigs I had been playing these past several years so it will be nice to have more time at home and to get home from a show before the calendar rolls over.

After all, I have already missed so much already.

So to all of the great musicians I have worked with over the past 5 years in the Tucson Country Music Scene, thank you for the great times, for challenging me and for the creative connection I was privileged to share with you. You will all hold a special place in my heart because everyone knows that if you work with people in a musical group on a regular basis you establish a bond that cannot be broken. Of course since these are also human relationships that means that there were also those moments of tension and discomfort so for that I ask these same people to forgive me for the times I let you down. I know that I wasn't always easy to work with but you always had my respect even when I failed to show it.

To all of the great people who filled our dance floors all of these years...all I can say is WOW! I have never been around such amazing people when it came to showing support and loyalty to both a group and to a particular musician. You taught me so much about love and friendship and I will never forget that. To be honest, you are the ones I will miss the most because you never owed any of the bands I worked a thing yet your constant support was such a gift to all of us. So for that, I say thank you and God bless you all.

I hope to see you all soon and wish everyone nothing but the best. 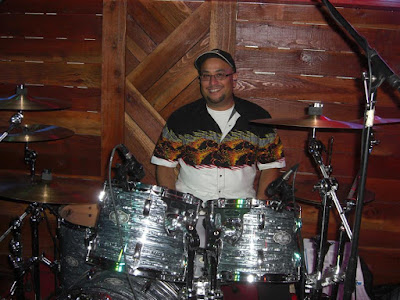 Posted by CSolorzano at 5:50 PM