Underrated But Not Under Appreciated: Jason Rullo

I remember watching a video interview of Jon Schaffer from the band Iced Earth when he stated that talent exists everywhere. I couldn't agree more because as someone who moved from the Los Angeles area to the Tucson area I can tell you that small town musicians are not necessarily less talented than those from the big city. It doesn't matter where you are from. It matters what you've put into your craft and if you have done the work you're probably a great talent.

The entertainment industry has always been about marketing because if you invest in putting something out there most people are going to do what they are told and take it all in. Sadly, there are so many artists out there who are true talents but for some reason don't get the financial backing that other artists get. So with that being said, I will take the time to discuss a drummer who I believe should be getting more praise for his drumming and that is Jason Rullo of the band Symphony X.

A few years ago someone recommended the band to me because they knew that I like progressive rock and am always looking for something new and exciting. Then someone let me borrow a DVD of the Gigantour tour and to my surprise Symphony X was one of the featured bands on that tour so I went straight to the chapter section and loaded the first track by this band that I had been wanting to check out. That was when I heard the song "Inferno" and was totally stunned.

"Inferno", from The Odyssey: https://www.youtube.com/watch?v=wzmZtXDI22M

At first I was taken by the entire band and wanted to hear more of what they had. That led me to You Tube and before I knew it I as on my way to Zia Records here in Tucson and went straight for the Metal section to find any Symphony X album but hopefully one with the track "Inferno" because I really liked that song. Sadly, the album The Odyssey, which features that track was not available so I wasn't sure if I wanted to buy anything just yet because I wanted to check out more of their songs before buying any other album.

Then one of the salesman approached me and we started talking. It turned out that he was a huge Symphony X fan and then pulled out the special edition version of Iconoclast, which at that point was their latest CD.  He then said that I should buy this now and that I would not be sorry because it was absolutely amazing. Immediately I was taken by the fact that it was a double album so right away I knew there would be a lot of music on this album.  I took the salesman for his word mainly because I saw great enthusiasm for the and because I could see from what little I knew already that they were very talented and creative.

I waited for the right time to listen to it because I wanted to listen to the album in its entirety. The following day I was going for a two hour drive to Phoenix so that was the perfect opportunity for me to listen to my first Symphony X purchase. The title track blew me away with its complex structure and awesome vocal performance by Russell Allen. Then I heard track two, which is called "The End of Innocence" and I was hooked. It was both complicated yet rocked and that was when I first took notice that their drummer was a beast!

"The End of Innocence" from Iconoclast: https://www.youtube.com/watch?v=qkfdgc5vP8U

So many people talk about the talent of some of the progressive drumming greats and I would never try to take anything away from those players. But I would strongly argue that Jason Rullo belongs up there with those players because his talent is unquestioned and his band has already created a legacy of great recordings and live shows for that matter. Symphony X is not a really big group in terms of popularity so it's hard to find videos on You Tube that are professionally shot. But, I came across a great drum cam video of Jason performing the opening track on the Iconoclast tour.


One look at that video and I could see that Jason is extremely smooth around the kit while also doing some awesome orchestrations with all of the great sounds available to him. The song itself is very complex melodically and Jason does a great job in doubling these very difficult parts. One could only imagine how talented and focused one would have to be in order to nail this song each and every night, which is reason enough to include Jason in the pantheon of the great progressive drummers.

Aside from being able to handle complex parts Jason is also great when it comes to pocket playing. Of course progressive bands are known to insert their little bits of cleverness in just about anything they write but it's nice to see them lay down some nice to grooves from time to time. This is best demonstrated in the song "Wicked" off the record The Odyssey.

"Wicked" from The Odyssey: https://www.youtube.com/watch?v=_HPaZ7qNeDk


And let's not forget that when you add metal to the fold that you have to expect a lot of double bass to one's drumming since it is typical to double a lot of the riff with the bass drum. One of my favorite tracks that shows Rullo's amazing double bass playing is the song "Heretic."


Symphony X is also great at creating songs that have a lot of feeling. My personal favorite is "Accolade II" because it has such a deep meaning for me personally. This song features not only some solid drumming but fills that really support the emotion from Allen's vocal performance. I think it's brilliant because it is still very complex but doesn't interrupt the flow of emotion I feel when I am on the journey that only this song can take me on.

"Accolade II" from The Odyssey:  https://www.youtube.com/watch?v=6Kb8SVgbzgM


I currently don't have every Symphony X album but I am working on completing my collection. The newest album titled Underworld is awesome and I know the rest that are missing from my collection will be just as awesome. I am also anxious to hear the rest of Jason's recorded work because he is a true talent and I hope to see both the band and their drummer receive the accolade that I think they properly deserve. 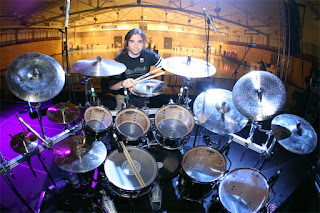 Posted by CSolorzano at 9:53 AM