Method to the Madness: Talking Drum Set Up with the Desert Drummer

Being a working musician I get the chance to speak to a lot of people. With my background and with the groups I work with it seems like I meet people with varying opinions who are a bit surprised when they see the way I set up my set. Imagine the people I get to encounter on a regular basis: country fans at a local watering hole or a casino who are there to see the Tony Corrales Band  fans of Christian music at churches and faith based events who are fans of Come Thirsty or recording engineers who are waiting to put microphones on my drums prior to rolling the tape. And this is when I'm not at my occasional jazz gig with Sonoran Sol with an audience who is already struck by the idea that I use more than a 4-piece set up.

About eight years ago I had some back problems and had grown frustrated with the long reach I had to deal with when I reached for my second rack tom. That was when I decided to study drummers and their set ups. I watched as many videos as I could and studied pictures of set ups that I would see on the internet as well as the positioning that I would see the drummers in as they were seated behind their sets. That was when I became intrigued by drummers such as Bobby Rock, Scott Rockenfield and Vinnie Appice who have been known for off setting their bass drums as if they had a two bass drum set up even though some of them used a double pedal or were just single pedal players.

One day I decided to set up my drums in that way just to see how it would feel and it was a night and day experience. Immediately I was taken back to the days of my youth when for a three year period I used an actual two bass drum set up, which allowed me to have both of my rack toms right in front of my snare. Now that I was doing a lot of solo drum set work, which included the use of lots of toms, I felt the need to bring my second rack tom closer to me.

Aside from the convenience of having my toms rearranged I also noticed how the rest of my set up was even more centered than usual. Since I was using a double pedal I was able to keep my hi hat stand as close as I had it with a single pedal set up. I also noticed that I didn't have to cross over as far to reach the hi hat, thus leaving my lead hand closer to the other parts of my kit. That and not having to reach as far to for the cymbals on the right side of my set up.

When people ask me about the set up I refrain from getting all technical and just say that I based it on the way we naturally sit. When we take a seat we don't have either of our legs facing in the direction that we face. Our midsection is in fact centered with both legs on either side of the center line. So if we sit that way when we do other things why not when we drum? Why does drumming require us to sit in a position that I observe to be unnatural?

At times sound men and recording engineers talk about the importance of the bass drum facing the front of the audience. To me that is a non-issue if the drums are going through the PA system. Further, if I actually had two bass drums in my set up they would most likely assume that I would have both drums off to the side even if I didn't play them both regularly. Why do drummers with two bass drums set up in this way? Because it is the most comfortable way of playing such a set up. Well, as far as I'm concerned drummers should set up in a way that is comfortable for them and the sound man's job is the set up the microphones, period. After all, our set ups are also part of our creativity as drummers because as long as we can mount it and reach it then it's part of our set up. And notice that I still haven't said anything about how we tune our drums.

Here's my set up from the top of my staircase: 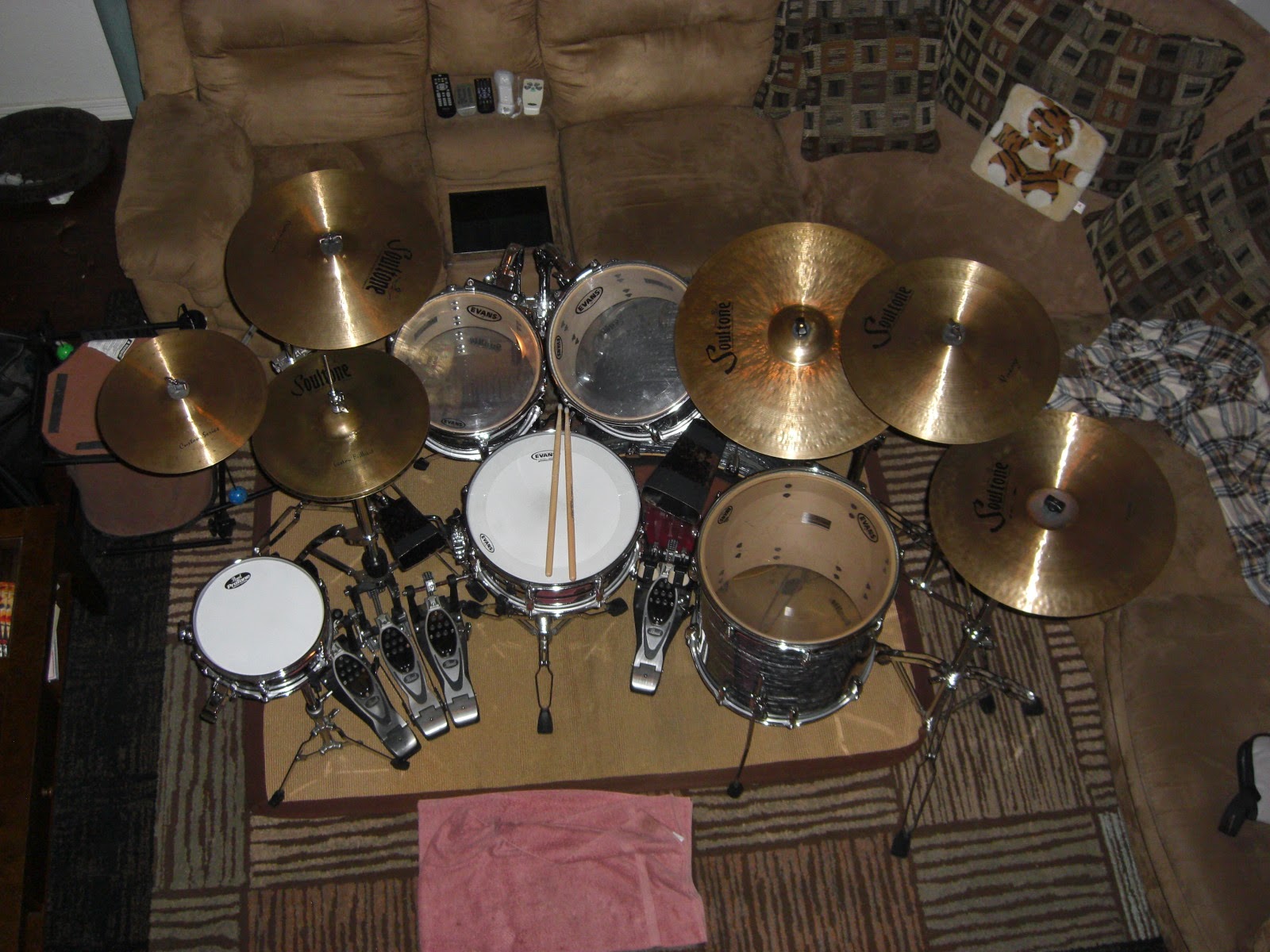 Over the years I have noticed more and more drummers doing the same as me. Back pain alone will motivate someone to try something different. For me, being centered didn't just make it more comfortable to play but also gives me the chance to see the whole audience as well as each member of the group that I am playing with. I am just sorry that I didn't think of this earlier as I originally had this dogmatic view of setting up my drums. That's why I am grateful to the drummers who dared to be different who inspired me to do the same. I would encourage other drummers to do whatever it takes to make them feel comfortable as well because after all, pain can lead us to make some drastic decisions. In my case it almost led me to give up my love for drumming. Thank God I was willing to try something different.